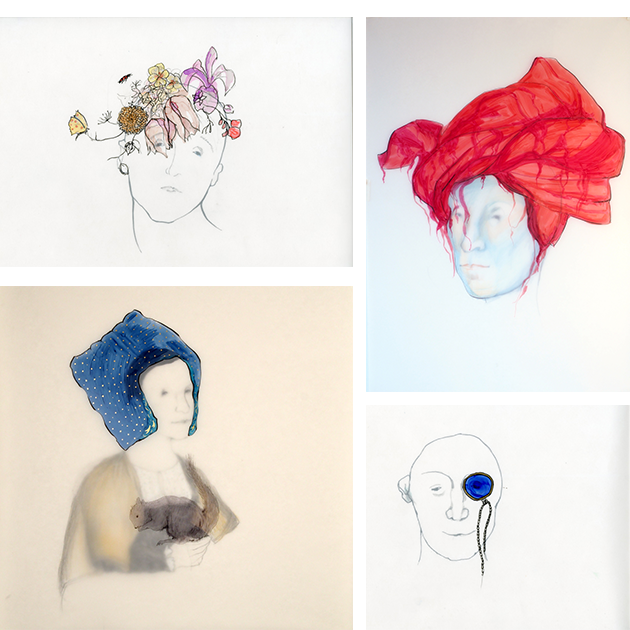 These works are all part of a series called "Maskhara" (pronounced mass-kha-rah--Maskhara is a Farsi word for masquerade, which also has a double meaning: ridiculous). It all started with a book project called "He Ridiculed, He Mocked, He Transformed." In that project I was exploring the more abstract idea of "the mask" and it's role in our lives and the illusion caused by the masks that we wear in our daily lives. Then I started expanding the idea by developing a series of multi-layer-ed drawings depicting imaginary masks, some fairly trivial in nature and some more incomprehensible, including some depicting vines. I have always been fascinated with vines in general; with its form as a plant, its glorious fruit, and the role of wine in our social lives. In a way, I think wine has an unmasking role which adds another layer to the irony of the concept of "Maskhara."

Khebrehzadeh studied painting in the Academy of Fine Arts in Rome. Solo exhibitions of her work have appeared at the Museum of Contemporary Art, Rome, and the Rhode Island School of Design Museum in Providence. Khebrehzadeh was included in the 6th Istanbul Biennial in 1999, the 5th Liverpool Biennial in 2008 and was also a participant in the 50th Venice Biennale in 2003, where she received the Golden Lion Award for the best Young Italian Artist. Avish Khebrehzadeh's most recent works were featured in the Discoveries section of ART BASEL Hong Kong 2013 (Galleria S.A.L.E.S.) and her Installation work "Where Do We Go from Here?" will be featured in GAM collection during Artissima 2013.  Avish Khebrehzadeh lives and works in Washington, DC.