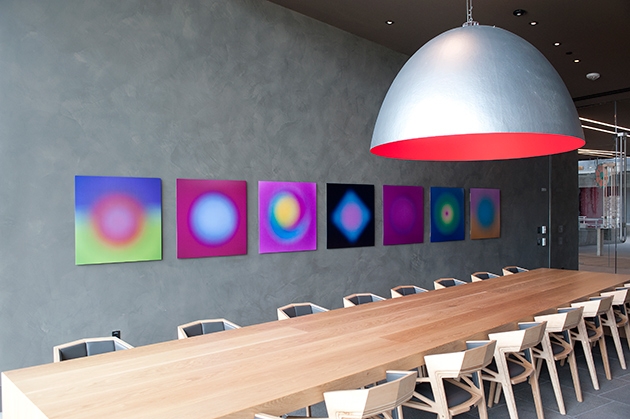 Armstrong recalls, “The Mandala photographs are loosely based on Buddhist paintings known as mandalas. Mandalas are concentric circles of images that depict central themes in Buddhism, such as the Wheel of Life or the Map of the Cosmos.  Through abstraction, simplification and blur, I hope to create a context for the exploration of these broad spiritual themes that, rather than relying on a codified system, remains open and invites the viewer's personal interpretation.

Like the other portfolios in the Infinity series, the Mandalas are made from collages that have been photographed with the camera's focusing ring set on infinity. Extreme defocusing allows me to create rhapsodies of color that change as one gazes into them: they pulsate as if alive. This sense of "being" within the inanimate invites an inquiry into the idea of the interconnectedness of all things. Whether seen as celestial spheres, imaginary objects, or microscopic details, the Mandalas are meant to be meditative pieces — glimpses into a space of pure color, beyond our focus, beyond our ken. Their essential purpose is to create a sense of transcendence, of radiance, of pure joy!”

Bill Armstrong is a New York-based fine art photographer who has been shooting in color for more than 30 years. Armstrong is represented by ClampArt in New York, Hackelbury in London, and numerous galleries across the country and in Europe. His Mandala series was featured in a two-person exhibition at the Philadelphia Museum of Art in 2008, and he had a mid-career retrospective at the Southeast Museum of Photography in Daytona Beach in 2010. He has presented work in numerous museum exhibitions including: Philadelphia Museum of Art; Hayward Gallery, London; Musee de l’Elysee, Lausanne; Centro Internazionale di Fotografia, Milan; and FOAM, Amsterdam.