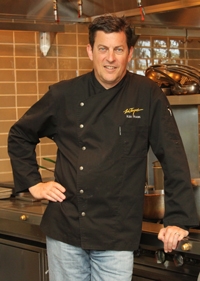 Acclaimed Chef Ken Frank is entirely self-taught and brings a distinctive, personalized touch to his contemporary French cuisine at the Michelin-starred La Toque restaurant, located in The Westin Verasa Napa.

Frank’s love of French cooking began in 1972 when his father went on sabbatical, moving the family from California to Yvoire, France, a 16th century village on the edge of Lake Geneva.  When it came time to return to the states, Frank chose to remain in France.  He began his culinary career as a dishwasher at a local restaurant, where he nurtured his appreciation for richly flavored food and his interest in a career as a chef was sparked.

After returning to California and refining his skills at a number of restaurants, Frank first achieved national acclaim at age 21 as executive chef at the Los Angeles restaurant La Guillotine.  Frank went on to serve as the opening chef at Michael’s in Santa Monica, considered the Los Angeles birthplace of California cuisine.  In 1979, the 23-year-old chef boldly opened the first La Toque on the Sunset Strip.

After a 14-year run, Frank sold La Toque to the Chateau Marmont Hotel and went to work with Isaac Tigrett at the House of Blues.  He launched the New Orleans House of Blues before returning to Los Angeles to open the House of Blues Sunset Strip, where Frank was tasked with developing the Foundation Room, a private, members-only restaurant on the top floor.

In 1995, Frank was hired to open Fenix in The Argyle Hotel in West Hollywood, where he introduced the concept of wine pairing with his tasting menu, dubbed the “Menu Fantaisie.”  The restaurant immediately received rave reviews and in 1995 was named one of America’s Best New Restaurants by John Mariani in Esquire magazine.  In 1998, The Argyle Hotel was sold and Frank decided to pursue his dream of moving to Napa Valley.

In September 1998, the second incarnation of La Toque debuted in Rutherford at The Rancho Caymus Inn in the heart of California Wine Country.  The restaurant immediately garnered national acclaim and was soon established as the Napa Valley’s newest dining destination.  La Toque was named one of the 20 Best Restaurants in America by Wine Spectator in March 2000, and was awarded a prestigious Michelin Star in 2007; the first year the organization published a San Francisco Bay Area guide.

In September 2008, ten years after opening La Toque in Rutherford, Frank relocated the restaurant to The Westin Verasa Napa.  Since the restaurant’s move to downtown Napa, La Toque has continued to be well-received by the nation’s top food critics and reviewers. In 2008, La Toque earned a three-star review by the San Francisco Chronicle’s Michael Bauer and in October 2009 was honored again with a Michelin Star.  Most recently La Toque was named one of “America’s Best Top 100 Wine Restaurants of 2012” in Wine Enthusiast Magazine.