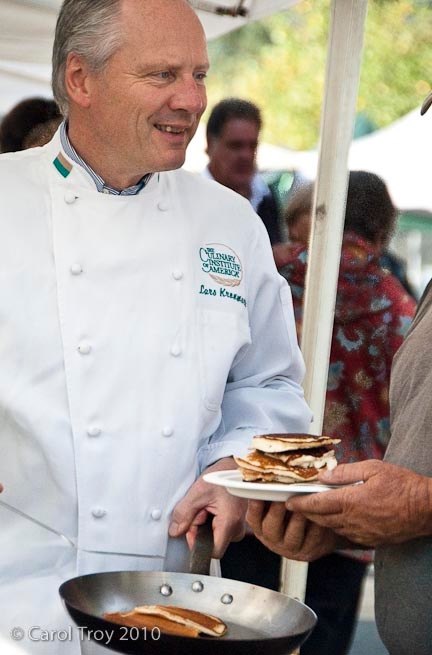 Lars Kronmark A native of Denmark and chef-instructor at The Culinary Institute of America at Greystone. As part of the start-up “dream team,” Chef Kronmark was hand-picked from the finest culinary educators in the United States to open the school in August of 1995.

As a chef-instructor, Chef Kronmark has led leading professionals in custom and catalog programs, as well as being involved with the annual Worlds of Flavors International Conference and Festival since its conception in 1996.

As part of his involvement in several international programs, Chef Kronmark has traveled to several countries including Mexico (with the award-winning chef and restaurateur, Rick Bayless), Italy, France, and Spain as part of a partnership with the International Olive Oil Council along with Paula Wolfort and Connie Gutterson
In 2010 Chef Kronmark spend 3 weeks at Macelleria Cecchini with The butcher from Tuscany, Dario Cecchini working side bye side with he’s staff in the Butcher shops and the Restaurants

Chef Kronmark helped launch the China Educational Project in 2001, for which he spent significant time in Shanghai and Beijing teaching Chinese hotel and restaurant chefs the art of contemporary American cuisine. He has also worked in the wine regions of Southern Australia as guest chef instructor in Adelaide for 6 months

Chef Kronmark’s interest in wine developed over the past 20 years and has culminated in recognition as a Certified Wine Professional. Besides conducting wine-related cooking classes, he also participates in events at local wineries and has been involved with the Napa Valley Wine Auction for the past 20 years and chosen over the past 10 years as the chef for the CIA at the Barrel action event. In 2010, Chef Kronmark was asked to be the celebrity guest chef at the wine auctions VIP Event at Meadowood, joining top chefs from all over the United States.

Before joining the CIA at Greystone faculty, Chef Kronmark was a senior chef–instructor at The California Culinary Academy for 14 years. In 2007, Chef Lars Kronmark was voted Chef of the Year by the Cordon d’ Or Gold-Ribbon Awards program as part of Cordon d’ Or-Gold Ribbon, Inc. located in St. Petersburg, Florida

Chef Kronmark lives in St. Helena with his family, where he grows Cabernet Franc grapes and makes his own wine, which includes grapes from The Culinary Institute of America at Greystone property.