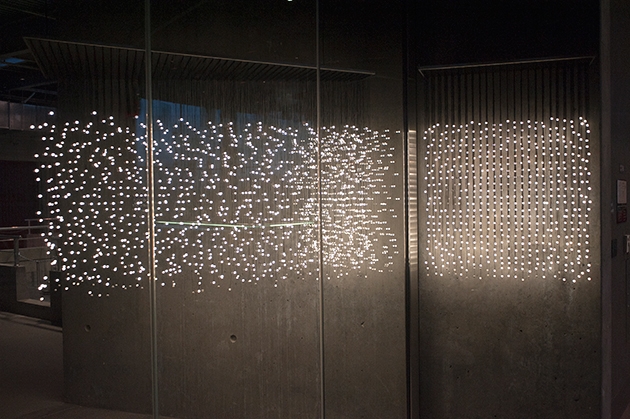 "In 1988, coming from a technical background in engineering and an artistic background in filmmaking, I began to create interactive video installations that involve the viewer and the viewer's response to a given situation. In creating interactive video art work, my goal has been to move away from the conventional computer screen 'button pushing' interface and instead to move towards creating works that have a more intuitive level of interaction. Making a distinction between a work that is controllable and a work that is responsive, I have tried to create installations that are less about a viewer dominating a work, and more about viewers participating in the developing personality of a work. My work incorporates electronic memory, prerecorded images, and live images.

Attempting to create systems that respond and progress in recognizably non-random, but at the same time unpredictable ways, I have tried to create works that have destines of their own. Having always been fascinated with the philosophical analogies of certain scientific disciplines, my work has been very influenced by science, in particular some of the ideas relating to chaos and quantum mechanics. Using technological tools and scientific models as metaphors for memory and illusion, my work seeks to interpret, represent, and mirror psychological states and processes, and their breakdown. Time and memory, individual and collective, electronic and real are the elements of my work.”

Jim Campbell’s electronic artwork is included in the permanent collections of the Museum of Modern Art, New York; the Smithsonian American Art Museum, Washington, D.C.; the Whitney Museum of American Art; the Metropolitan Museum of Art, New York; the San Francisco Museum of Modern Art; the de Young Museum, San Francisco, and the Berkeley Art Museum. He is the recipient of the San Francisco Museum of Modern Art’s 13th Annual Bay Area Treasure Award as well as a Rockefeller Foundation in Multimedia, three Langlois Foundation Grants and a Guggenheim Fellowship. He has two Bachelor of Science degrees in mathematics and engineering from MIT and as an engineer holds nearly twenty patents in the field of video image processing.