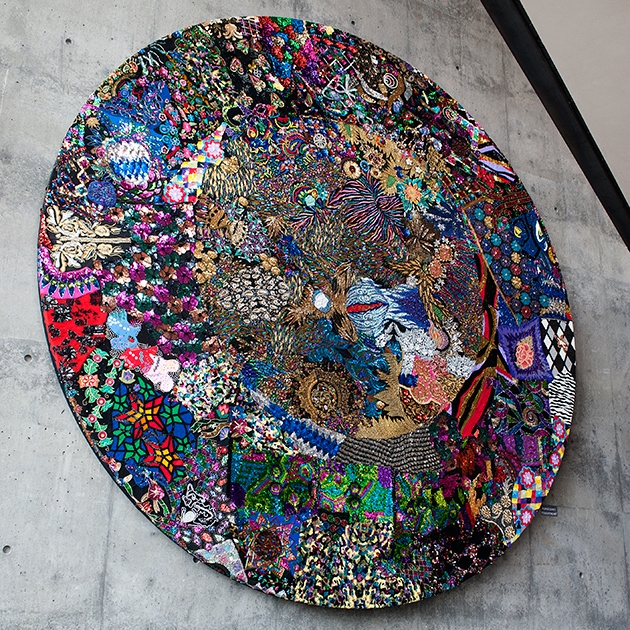 Trained as both a visual artist and dancer, Nick Cave works in a wide range of mediums, including sculpture, installation, performance, and video. He is perhaps best known for his Soundsuits, which are carefully and obsessively handcrafted from found objects, recycled remnants, and discarded materials.  Of his work, Cave says: “My ability to make objects sing lies within the multiple readings of each work.”

“This piece Craig and I gave each other for our anniversary. Nick teaches in Chicago and comes from a design background. His use of textiles is the best among his contemporaries. He is also a pure delight. My daughter Jennifer and I had dinner with him a couple years ago and we were fascinated by his thoughtfulness, creativity, and humor. Before I first saw this piece it was first described to me as 'eye candy' by our curator, Virginia Shore. Every time I look at it I’m reminded how right Virginia was.” –Kathryn Hall

Nick Cave was raised in Missouri in the company of many siblings and modest means, to which he attributes his interest in assemblages and found objects. He graduated from the Kansas City Art Institute in 1982, where he learned to sew and began studying dance through an Alvin Ailey program, both in Kansas City and New York City.  Cave went on to earn an M.F.A. from the Cranbrook Academy of Art in 1989.  He directs the fashion graduate program at the School of the Art Institute in Chicago.  His work is in a variety of collections, including the Brooklyn Museum; Crystal Bridges; the Detroit Institute of Arts; the High Museum; the Hirshhorn Museum and Sculpture Garden; the Norton Museum of Art; the Museum of Modern Art, New York; the Birmingham Museum of Art; the De Young Museum; the Museum of Fine Arts, Boston; the Museum of Fine Arts, Houston; the Orlando Museum of Art; the Smithsonian Institution; and the San Francisco Museum of Modern Art, among others.