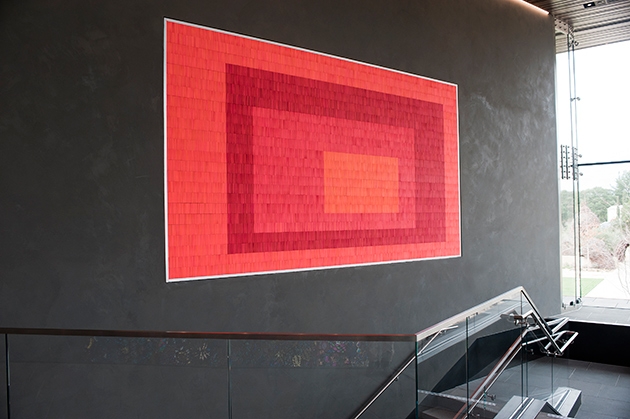 Wegner notes, "The edge of a piece of paper doesn't amount to much. You might miss it if you weren't looking for it – and who would bother to look for it? It is, literally, almost nothing. Yet if you put enough edges next to one another, they start to become something. In this case, I've put almost half a million sheets next to one another. The result is now insistently, emphatically there. It's not nothing. But what is it? The surface is lush and painterly, it's flat like a painting, it's framed like a painting – but it's not painted. It has the weight and mass of sculpture, presumably; paper weighs a lot for the same reason trees do. But these aspects of the work are muted, implied but hidden from view. So if it's sculpture, you can't tell. And while the name alludes to architecture, and the composition suggests architecture, and the piece itself is embedded in the architecture, Red Rooms isn't architecture. Just when you think it might be one thing, it seems to become something else. Its defining characteristic is to elude definition.

Likewise with the color. Any of the reds in this piece might seem objectively red if viewed in isolation. Yet viewed together, any given red is only arguably red, only more or less red than the red next to it. In this way, we proceed from certainty to ambiguity, from objectivity to subjectivity, from what-it-is to how-you-see-it. Reds within reds within reds. Rooms within rooms within rooms.  In art as in life, the more you see, the less you know.”

“There are many ways to make an installation. A particularly confounding one was employed in this work using paper by the artist Peter Wegner. He began with dozens of samples of commercially available reds, each slightly different from the others. Wedged together in varying rhythms – six sheets of one color next four sheets of another, and so on – the 443,520 colored edges optically mix to create richly varied monochromes.” –Kathryn Hall

Peter Wegner is an American artist focused on the intersection of art and architecture. He is a graduate of Yale University, where he delivered a lecture in spring 2014 on the color blue. His work can be found in many museums, including the Museum of Modern Art, New York, New York; The Solomon R. Guggenheim Museum of Art, New York, New York; The L.A. County Museum of Art, Los Angeles, California; The Museum of Contemporary Art, Los Angeles, California; the San Francisco Museum of Modern Art, San Francisco, California; and the Yale University Art Gallery, New Haven, Connecticut.