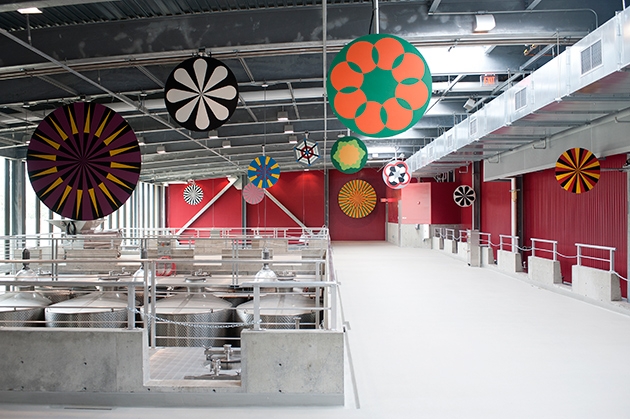 Jim Drain and Ara Peterson have worked collaboratively since 2003.  The primary focus of their work has been to explore visual phenomenon not only as an optical experience but one that is also sublime and comprehensive.  Working collaboratively is an unconventional artistic working method; however it allows Drain/Peterson to achieve new territory, or a “third mind” that they could not find working individually.  Absurdity and Order play dueling roles in their work; Drain/Peterson’s work typically explores a ‘visually unified’ space using a bold palette, the play of scale and by exploring the uses of straight-forward systems to achieve airy moments of a day-dream state.

Pinwheels integrates functionally and aesthetically into the fermentation tank room: the pinwheels complement both the prevailing visual language of the room while directly drawing from the winery’s pneumatic system: nozzles shoot intervals of pressurized air onto the back of the pinwheel fins to make each pinwheel spin. The riveted aircraft-style construction echoes the visual language of the space’s galvanized I-beams, the stainless steel tanks and the grey of the mezzanine floor. The tank room itself becomes animated by the motion of the works and the sound of the pneumatics.  The pneumatics allow for a more extreme optical experience by allowing for independent motion and continual speed change. It is as if the entire tank room itself becomes the artwork, transforming it into a landscape of industrial daydreams.

Ara Peterson and Jim Drain have exhibited both separately and together in the United States and internationally.   Previous to working as a duo, both artists were part of the four-person collaborative Forcefield, a music performance and video group that began working together in 1996. As the collaborative Drain/Peterson they were included in the Lyon de Biennale in Lyon, France (2003); in the exhibition titled, “Bizarre Love Triangle” at the Mattress Factory, Pittsburgh, Pennsylvania (2003); in the exhibition titled, “Wiggin Village” at the Moore Space, Miami, Florida (2004-2005); at the exhibition titled “Hypnogoogia” at Deitch Projects, New York (2005-2006); “The New York Minute” curated by Kathy Greyson at MACRO Future, Rome, Italy (2009);  “The New York Minute” curated by Kathy Greyson at the Garage, Moscow, Russia (2011).